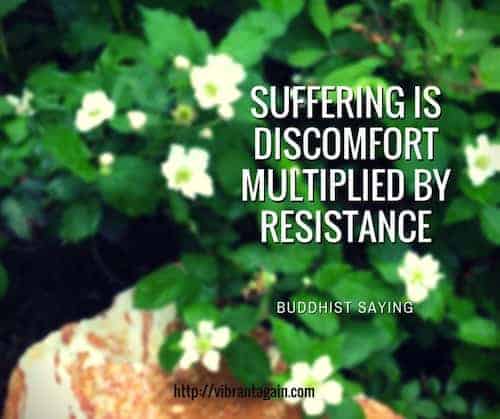 Resistance: the ability to prevent, oppose, withstand, or strive against an action or thing.

In physics or chemistry, this property of opposing is harnessed to create change or act as a protector against change.  In an electrical circuit, a resistor opposes the flow of electricity to create power.  A chemical resistor opposes the action of a corrosive agent and protects substances from disintegration.

In life, we often do not experience resistance for the alchemical gift that it is.

That is, in part, because we don’t recognize resistance when it occurs (let alone know how to use it).  Recognizing resistance is the first step in harnessing its power to create what we want in life. Often we are completely oblivious to the fact that we are in the grip of resistance.  What follows are some examples of resistance.

The many faces of resistance:

When unacknowledged or actively fought against, resistance denies our Truth and further blocks abundance and the flow of life. Resistance is rooted in our beliefs, and is expressed through behavior–often unconsciously.

Interestingly, we experience resistance more intensely when we are trying to improve.  No matter if you want better health, more money, deeper relationships, or anything else worthwhile, you are much more likely to have resistance to the improvement.  Also, the more important the goal, the less likely you are to see where you are resisting.

Make no mistake: resistance is a powerful force.  I have seen countless times the destructive force of resistance; I can think of several clients who just as they were about the breakthrough would have a “resistance flare” and their recovery would tank.  Or people who if you complimented them on their weight loss, would gain 5 pounds over the next week.  Or, clients who noticed that a particular tool was working well would suddenly forget to use it.

How is resistance showing up for YOU right now?

And more importantly, WHAT is resistance preventing you from having?