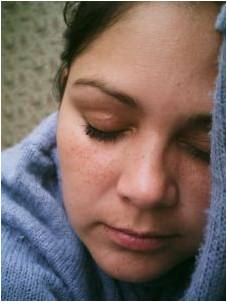 Does that sound like someone you know?  We all get sick, we all get tired, but some of us seem to always be sick &/or tired.  And many of those fatigued and barely functioning out there have had enough—if only they could muster enough energy to be outraged. If you are someone who suffers from chronic fatigue, aches, pain, and poor sleep I want you have to someone you love read this with you; they don’t get it…but you do.

For the rest of you, let me explain.  Your wife/girlfriend/friend/co-worker/mother often feels, shall we say, unwell; everyday seems to bring a different set of symptoms.  Common themes include: deep, achy pain in the muscles and joints; hurts to touch the skin; fatigue where it feels like dragging an anvil around; irritability, especially when hungry or tired; moodiness that is worse at certain times of the day of month. These sick and tired days are just most of the time—sometimes she feels pretty darn good and gets a bunch of stuff done.  And then she feels terrible for days after.  What the heck is going on? She’s gone to the doctor, but they don’t know how to really help.  The doctors have run lots and lots of ever more expensive tests with no clear answer to show for it.  Perhaps she has been diagnosed with fibromyalgia, chronic fatigue syndrome, depression, or something else (or nothing).  Maybe she takes medications like antidepressants, muscle relaxants, or pain meds.  But those drugs only help a little; shouldn’t she be much better by now?

The Root of the Problem

She isn’t much better because they haven’t gotten to the root of the problem.  Sometimes treating the symptoms (fatigue, pain, depression, and so forth) helps a little, but the problem is still there.  It is like picking the flower off a dandelion and being upset when it grows back later; you have to get the problem by the roots.  Fibromyalgia, chronic fatigue syndrome, and other conditions often have an underlying cause; correct that and the symptoms go away on their own.

Maybe She is Faking

Yes, some people really like the drama of being sick and tired.  But that probably isn’t your wife/girlfriend/friend/co-worker/mother; more often than not she feels so crummy she can’t imagine feeling good again.  If she were herself, she would not stand for this!  But the problem has changed the way she sees the world; sometimes she needs someone like you to stand up for her!

You have wanted to help, but didn’t know how.  She may have snapped at you when you have made suggestions in the past, and you are reluctant to make that mistake again.  I assure you, she really wants this to stop, but she is also sick and tired of trying things that don’t work.  Why not try something that DOES work?

Vibrant’s re-balancing program and PEP™ plan is not right for everyone.  However, if she has symptoms like chronic pain, fatigue, irritability, moodiness AND is sick and tired of being sick and tired, the program is probably right for her.  In weeks, she will begin to feel like herself again. Contact me today for a complimentary consultation and find out how Vibrant can help her feel like herself again.